Address at the University of Surrey Carol Service, 2016.

Look around you: what do you see? At first glance this cathedral is full of disappointing, grey, dirty scaffolding, ugly red plastic barriers and warning tape. Not terribly Christmassy.

But if you try and look behind it you might start to see it a bit differently. Perhaps then you can see that the scaffolding represents work in progress, of restoration, renovation and transformation.

Of course if you’re a University of Surrey civil engineering student you’ll be fascinated by it. As I speak, you’re probably calculating the weight bearing capacity of the beams supporting the scaffolding way up in the heights.

As you gaze up what do you see? Being poetic for a moment you might look up into the dark voids and spaces and ponder the mystery of universe and world and your own place in it. You might engage with the final reading tonight which speaks of ‘The light [which] shines in the darkness, and the darkness did not overcome it’ and proclaims, ‘The true light, which enlightens everyone, was coming into the world.*’

This enlightenment changes how we understand the world and being human. Universities rightly pride themselves on generating learning through accumulating information and building knowledge. Universities search out and re-search knowledge.

The great challenge in a rapidly changing world is to ask an ancient question, ‘where is wisdom to be found?’ The habits of thinking that we have from our own disciplines will give us different insights and prompt us to wonder.

At the heart of this is the question of why sound waves oscillating at different speeds become music; why the tiniest micrometres of silicon are images of captivating beauty; why the stars, that have always prompted humanity to wonder, poetry and art, also contain clues and codes to understanding the depths of the story of the universe in which we exist. Wonderful things.

Where’s this all going? Where’s Christmas gone? Well, it’s right here. I just wonder if you had been a shepherd, called by angels, or one of the Magi, guided by a star, and you arrived at the manger in Bethlehem on the night of Christ’s birth what you would have made of it. 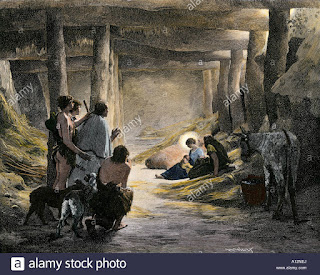 The scene was most unlikely as a holy place, a bit like this cathedral at the moment. A stable or cave, where animals live, an exhausted woman who has just given birth, and scared man, anxious about the mother of the child lying in the feeding trough.

Into that unpromising scene is born a child who is declared to be ‘Emmanuel, God with us’. It is a most extraordinary claim.

This claim is encapsulated by St John, who we will hear in our final reading. God, all that has been, is and will be, is now to be found in one particular place at one particular time with global, cosmic impact. John connects the very beginning of all things with the lives we live now, because in Jesus Christ is life, transformation and hope. John connects human knowledge and learning with God’s deep wisdom of the art of being human in faith, hope and love.

Mary famously declared, ‘my soul magnifies the Lord’. To magnify is, at the same time, to enlarge and make more intense. A magnifying glass can expand our vision, and can intensify the sun’s rays to burn. This Christmas look beyond: look beyond the obvious, the tinsel, mince pies and glitter, search and re-search what magnifying the Lord means for you.

Over that unpromising scene in Bethlehem, a messy stable, a man and woman and baby, sang choirs of angels because in Him the fullness of God is pleased to dwell: and you know, looking at that, I’m sure they sang, ‘wonderful things happen here’.

John the Baptist: righteousness is not hereditary

First preached as a sermon at Guildford Cathedral, second Sunday of Advent 2016

Over the last few years the interest in family trees has grown and grown. Family trees tell us something about who we are by naming the connections and relationships that have brought us to being: they tell us about the roots and branches of families, groups of people and ultimately nations.

They can be dangerous though. They can lead us to over identify with close biological connections - tight or exclusive and the bonds of family, kinship and nation can lead to an unhealthy tribalism or veneration of social groupings. This fragments the oneness of being human in a common ancestor made in the image of the One God.

It is precisely that issue that John the Baptist identifies in the Pharisees and Sadducees who came to hear him. ‘Do not presume to say to yourselves, “We have Abraham as our ancestor”; for I tell you, God is able from these stones [the stones of the wilderness] to raise up children to Abraham’ (Matthew 3.9). In other words, don’t rely on your supposed ancestral connections, on your family tree, to think you’re right with God. Righteousness is not hereditary, it is something each one of has to work at here and now.

The Archbishop of Canterbury, as was well publicised at the time, discovered that the man he thought to be his father was not. His response was to situate his identity not in a family tree, but in Christ.

The axe ‘lying at the root of the trees’ (v. 10) will bring down the idea that righteousness is hereditary, that biology always gives the most sustaining relationships.

It is ironic perhaps that John the Baptist shared a family tree with Jesus. John was Jesus’ cousin, although like in many Asian families the word ‘cousin’ could be a loose description. It is clear though that Mary, the God-bearer from whom Jesus received his humanity, was related to John’s mother Elizabeth. So Jesus’ and John’s DNA must have been pretty similar.

But similar DNA does not cut the mustard. What connects John - and us - to the life, death and resurrection of Jesus Christ, the Son of God, is in the fruits of repentance and baptism, for the forgiveness of sins, which is a demanding, radical association of ourselves with Christ above all things, even bonds of kinship and tribe. It makes us ask: what do true, sustaining relationships look like? Where do I find them in my life?

The axe, then, is not destructive. John proclaims a message of both threat and promise. Threat: an axe lying at the root of the trees. Promise: a shoot shall spring forth from the tree stump of the family tree of the man called Jesse. Both in his own day and here and now John brings threat to many and promise to all.

We just have to glance around us at this time of year, late autumn giving way to early winter, to see threat and promise in the trees. The trees have all but shed their leaves. They look at their most dead. And yet deep inside the tree sap is brewing ready to rise and generate new leaves and new growth.

So it is that our final arboricultural image is in the promise that springs from the stump of a tree, the stock of Jesse.

Isaiah names this promise; St Paul, in our second reading, in the letter to the Romans also references it. This is an inclusive promise that the heirs of the patriarchs and prophets are not solely the people of Israel but those who have been adopted into the people of God in Christ. They are known as the Gentiles, that is you and me. We have no ancestral entitlement yet, Paul says, there will come from the root of Jesse ‘the one who rises to rule the Gentiles, [the nations, the peoples, the tribes]; and in him shall they/we hope’ (Romans 15.12). The God of Israel is the God of all Nations, ‘from whom’ as Paul writes elsewhere, ‘every family in heaven and on earth is named’.

In the Lady Chapel of this Cathedral there is an icon, of the Orthodox tradition, which is of the Jesse tree. At the bottom Jesse lies prone, asleep or possibly dead, yet growing out of him is the trunk of a tree. In the branches are our ancestors in the faith, patriarchs, matriarchs and prophets. And at the heart of the Jesse Tree is the Mother of God with her Son, our Saviour, enthroned on her lap. As the Elizabethan poet, Francis Kindlemarsh, put it, ‘an earthly tree a heavenly fruit it bore’: that heavenly fruit, Jesus Christ, the earthly, Mary.

The invitation of that icon is to be grafted into the living vine, to the Tree of Life in Jesus Christ.

John the Baptist prepares the way for the coming Lord, and demands of us lives that reflect the purity and holiness of the One Who Is to come. Something that we achieve, not by our ancestry, not by our own strenuous efforts but by confessing our sins, resting in Christ and receiving his life in baptism and eucharist.

Sharing in that life may we pray that the God of hope will fill us and all the world with all joy and peace in believing, so that all may abound in hope by the power of the Holy Spirit. Amen.

Posted by The Revd Dr Andrew Bishop at 07:35 No comments: