How can life go on? Reflections for HMD 2017

Personal reflections following a first visit to Auschwitz in January 2017

Two weeks ago I flew out of Cracow having been in Poland visiting Auschwitz-Birkenau for the first time. It was my first visit to Auschwitz and I was there as part of a group of Anglican clergy led by the Archbishop of Canterbury.

That question: ‘how can life go on?’ is addressed to all humanity. The implications of the question are huge. How can life go on in the face of crimes against humanity, genocide and pernicious, virulent anti-Semitism? How can life go on after the Nazi’s brutal, systematic attempt at exterminating a whole people?

But I want briefly to give a very personal, rather unformed response in the wake of my visit to Auschwitz.

I have woken today with a heavy heart and, as I knelt to say my prayers this morning, tears that filled my eyes, just as when I was there, remembering that this day marks the ‘liberation’ of Auschwitz.

Those tears were prompted as I walked around Auschwitz 1 and the site of beatings, hangings, shootings, starvation, torture, gassing and sadistic brutality.

Those tears were prompted as I stood by the railway line at Auschwitz 2, Birkenau, where families - men, women and children - were separated and sent to die by gas or by hard labour, starvation or random acts of malice.

I stood there considering what would happen if I and my family had been taken there: would I be judged fit to work? What of my fit, sporty 17 year son? Would he be assigned to the Sonderkommando to the work of removing bodies from the gas chamber and putting them in the crematorium, after extracting gold teeth and cutting off women’s hair? What of my skinny 14 year old son, the right age to be spared the gas but would he be judged strong enough? What of my 12 year old son, could he be passed off as 14 and thus not go straight to the gas chamber? Perhaps. Perhaps not. What of my 8 year old daughter? What of my wife? The chances they would live beyond their first day at Birkenau would be limited, and I would never see them again and not be able to say goodbye. How can life go on?

Images and thoughts assaulted me throughout my visit. I know others in my group were

struck by the same things as me: walking under the Arbeit Macht Frei gates; through the death gate at Birkenau; the close proximity of the Camp Kommandant’s house where he lived a normal family life next to his murderous day job and where he was hanged after the war because of his crimes.

And there were other images that will stay with me. Being January there was snow on the ground and the landscape looked beautiful and innocent as snow does. But the dissonance between the beauty of the snow and the sunsets over Birkenau with what happened there was acute. 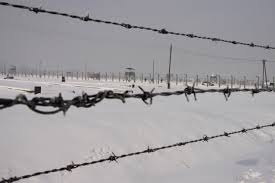 I was astonished not to see any walls, but just thin strands of barbed wire meaning that the prisoners could see out and the locals see in. I was revolted, almost physically, to learn more about the programmatic degradation of human beings so that they felt disgusting to one another and to themselves. I simply stood in silence by the pits into which the ashes of the dead were dumped, and where they still remain. How can life go on?

But life did go on for some. And, thanks be to God, the Jewish people were not eradicated, but are here and contribute to the diversity of society and our world.

The liberation of Auschwitz came 72 years ago tomorrow.

What sort of liberation was it? Elie Wiesel and Primo Levi’s accounts as survivors of Auschwitz remind us that the liberation for them was not a joyous time for a party like VE Day 1945 here. Rather, it initially meant being force marched in appalling weather to other camps.

But following the end of the war and the uncovering of all that the Holocaust was, the question ‘how can life go on?’ is a haunting one. Perhaps after my visit my first response is that it does: life does go on.

Life goes on but never to be the same.

With the Archbishop and fellow clergy we reflected on deep and painful themes such as the Church’s relationship with God’s ancient people the Jews; deeply aware given where we were, of the inglorious part played by the Christian churches in fostering antisemitism in Europe over centuries and the almost total silence of the Church in the 1930s during Hitler’s rise to power.

How does life go on? It goes on in never letting the memory of Auschwitz fade or be denied. Life goes on in all the times we speak out about genocide, in all places where it happens. Life goes on in an uncertain world if we can name and expose anything which snuffs out life, or fosters hatred and death, for example, where people are identified in groups as somehow less than the ideal or norm, whether based on their faith, ethnicity, sexuality, gender or physical abilities.

Returning from Auschwitz my life does go on, but never to be the same again.

What can be said? Reflections on Auschwitz

These reflections come following a visit to Auschwitz with the Archbishop of Canterbury and a group of fellow Anglican clergy earlier this month. On Thursday 26th January 2017 I will join with my Jewish colleague and others from around Surrey at the University of Surrey to commemorate Holocaust Memorial Day. I have been asked to speak at the event having so recently visited Auschwitz. What follows is my beginning to work through what it means to speak about something unspeakable. As Archbishop Justin Welby has said elsewhere, “I’ve come away with too much to write, and no words to write it.”

But here are some initial thoughts of mine.

'There is a time to speak and a time to keep silent' Ecclesiastes 3.7b

There is a profound silence at Auschwitz.[1] That silence emanates from the deathly hush of the gas chamber after people have been killed - murdered - and before their mortal remains are turned to dust and ashes in the ovens.

It is said that the birds do not sing at Auschwitz. In my first visit there earlier this month I don't recall birdsong, but that may just have been me being unable to hear sounds of beauty and unrestrained joy in a place that represents the polar opposite of all that is good. What I do remember, whilst walking around Birkenau, was hearing the barking of a dog quite clearly. That bark pierced the freezing air as an inarticulate cry that spoke more deeply than I knew at the time.

The people who were killed at Auschwitz had not always been silent or silenced: they spoke, laughed, cried, had dreams, aspirations and hopes. They prayed: praise, lament, supplication and thanksgiving. They spoke eloquently and passionately; they gossiped and slandered. Some had not even learned how to speak beyond the primeval cry for their mother's breast. In short, they were human beings, ordinary and living their lives.

The humanity of those killed, in all its ordinariness and prosaic detail, is the first thing that the Nazis sought to deny. Their strategy was one of, first, identification (the Nuremberg laws and the wearing of the yellow star), second, isolation (the ghetto) and, third, eradication (Auschwitz). They predicated all this on the less than humanness of the Jewish people, and because of that they had no right to speak, be heard, or to breathe. Human rights only apply to human beings.

Witnesses to the killing testify that those people who were killed at Auschwitz both sang psalms to God and screamed out in terror: they were not silent lambs led to the slaughter.

Anything that one writes or says about Auschwitz has to be properly reticent. It can never be casual or cheap. Auschwitz demands that we pay attention to our silences and our speaking. It's not simply about the choice of words but whether or not we deploy words at all.

Why so? In the face the industrialised and systematised processing of death there is little that can be said that is not trite, hollow or over earnest. Anything we might seek to say about Auschwitz has to pass a high burden of authenticity.

In The Edge of Words Rowan Williams points out that choosing to keep silent can operate in more than one way.[2] Silence can be a way of honouring those people and situations about which we cannot properly speak. However the Nazi project was dependent on German society keeping silence about the violence and death at its heart: colleagues, neighbours and friends of Jewish people did not speak out. For every Oskar Schindler and Maximilian Kolbe there are countless stories of people betraying Jewish people and effectively condemning them to Auschwitz and all that that held.

In the wake of Auschwitz we also need to guard against 'over speaking' that is, naming things evil that may be distasteful, so that when that which is truly evil is present it can be identified, isolated and defeated.

Auschwitz puts me, as someone who always wants to speak, or at least talk, in a difficult position. To speak means I might say too much or not enough, to remain silent, whilst honouring the dead, also can collude with the silence about their fate and what led and leads to it. All I can do is make that judgement in the hope that I speak well: if nothing more, Auschwitz makes me all the more aware of the power and 'edge' of words and silence. May Auschwitz, the place and the idea, never be forgotten or the memory of those who died there fall silent.

I want to conclude with the words of Elie Weisel an Auschwitz survivor, the author of Night, with words from his speech accepting the Nobel Peace Prize in 1986:

The world did know and remained silent. And that is why I swore never to be silent whenever and wherever human beings endure suffering and humiliation. We must take sides. Neutrality helps the oppressor, never the victim. Silence encourages the tormentor, never the tormented. Sometimes we must interfere. When human lives are endangered, when human dignity is in jeopardy, national borders and sensitivities become irrelevant. Whenever men and woman are persecuted because of their race, religion, or political views, that place must – at that moment – become the center [sic] of the universe.[3]

[1] When I am referring to Auschwitz, I am referring to both a place and an idea: the concentration camp and death camp - Auschwitz 1 and Auschwitz 2, at Birkenau - and also using 'Auschwitz' as representing the whole Nazi eradication programme of God's ancient people, the Jews, intentional, brutal and evil as it was, and the others - amongst them Poles, Gypsies, Jehovah's Witnesses, Soviets, catholic priests and religious - who were also murdered.
[2] Rowan Williams, The Edge of Words: God and the Habits of Language (London: Bloomsbury, 2014), Especially on silence as a moral choice, 48-51.
[3] Elie Wiesel, trans. Marion Wiesel. Night. (London: Penguin Books. 2006), 118.
Posted by The Revd Dr Andrew Bishop at 00:25 No comments: